The Case of The Lonesome Lushington 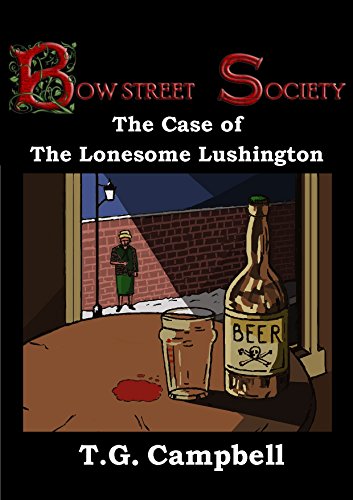 About the Bow Street Society: The Bow Street Society is a fictional group of amateur detectives, operating in Victorian London, that feature in the murder mystery writings of award winning crime author, T.G. Campbell. Each of its civilian members has been enlisted for their unique skill or exceptional knowledge in a particular field derived from their usual occupation. Members are assigned to cases, by the Society’s clerk, Miss Trent, based upon these skills and fields of knowledge. This ensures the Society may work on the behalf of their clients regardless of their client’s social class or wealth; cases that the police either can’t or won’t investigate. From an artist to an illusionist, from an architect to a veterinarian, the Bow Street Society’s aim is to provide justice by all and for all.

About the book:
In this sequel to The Case of The Curious Client, the Bow Street Society is privately commissioned to investigate the murder of a woman whose mutilated body was discovered in the doorway of the London Crystal Palace Bazaar on Oxford Street. Scandal, lies, intrigue, and murder all await the Society as they explore the consumerist hub of the Victorian Era & its surrounding areas, glimpse the upper classes’ sordid underbelly, and make a shocking discovery no one could’ve predicted…

Notes from the author:
A detailed explanation by T.G. Campbell about her inspiration forThe Case of The Lonesome Lushington, and the historical context of the book. The real criminal case of Jack the Ripper and the fictional account of Sweeney Todd are just two topics discussed in this extensive bonus feature.

Gaslight Gazette:
Featured in the book as the fictional newspaper read by London’s inhabitants, the Gaslight Gazette is now the real-life, FREE, monthly newsletter for Bow Street Society fans. Information about how to subscribe is now included in the book.

The Case of The Lonesome Lushington will appeal to Victorian enthusiasts, those fascinated by the Jack the Ripper case, and fans of Kate Summerscale’s book, The Suspicions of Mr Whicher, Amazon Prime’s series, Ripper Street, and Sir Arthur Conan Doyle’s Sherlock Holmes stories.