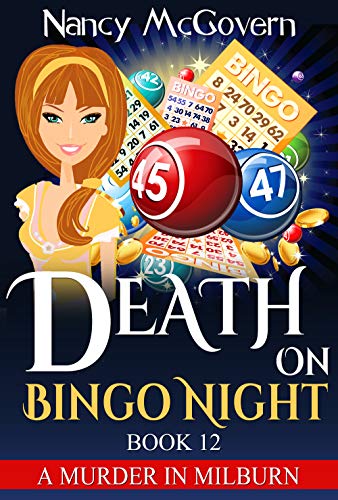 Nora Newberry is catering the Milburn Ladies Club’s Annual Bingo Night and this year it’s going to be a big one! One of the wealthiest women in town has generously donated her cherry red 1971 Corvette and it has officially been announced as the Grand Prize in the night’s final game! Everyone in town has their cards and is ready for their chance to win!

But things aren’t going to go off as smoothly as planned.

The big winner, quiet & shy Lucy Dobbs, has just been denied her prize due to a technicality. But everyone is even more surprised when, unwilling to stand for it, she confronts the president of the club, the well-known bully, Anna Hayes, and soon a catfight erupts in the bingo hall! It’s broken up easily enough but, despite everyone’s urging to give the winner her prize, the club leader will not concede. Even when it ends up costing her her life…

Could the introverted Mrs. Dobbs be the murderer? Could someone else have taken advantage of this opportunity to knock off their foe? Or could something much more nefarious be going on?

Nora Newberry intends to find out!

Death On Bingo Night is the 12th & final story in Nancy McGovern’s bestselling series, “A Murder In Milburn”. But don’t worry because, when you finish reading this one, you can continue right on to Nora’s new series, “Return To Milburn”, in which she is 25 years older and even wiser!

Be sure to sign up for Nancy’s newsletter (inside) for even more goodies PLUS a FREE BOOK as a Thank You for signing up!